she often searches for the answer you desire… 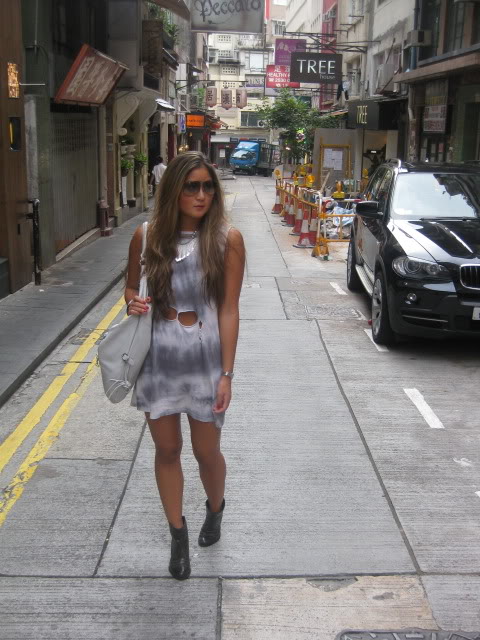 Topshop boutique tunic/dress, Asos dress, H&M necklace, bag from random boutique in Hong Kong.
Do you ever get curious looks when walking down the street, and have people approach wondering where you are from? This is almost a daily occurrence for me. “Where are you from?” may be one of the world’s most confusing questions. Well, for me anyway. Due to my obscure exotic looks, extreme height (for an Asian girl), tanned skin, distinct American accent, and definite Londoner status, I often get this question along with lingering stares. The lack of ability to locate a one word answer for this seemingly simple question has always annoyed me. I have always found envy for my friends who can proudly dictate their obvious answer for the hundredth time, like it is second nature.

The confusion starts here: My parents are both Taiwanese, but my Father has resided in Hong Kong for the past 20 years, and my Mother has called west coast U.S.A her home since her late teens. I met the world for the first time in California, where my family camped out through my single digit years. We then sporadically wheeled north, and decided Washington State would be the perfect home. Although my Mother and brother adapted perfectly, I quickly discovered I was not fit for suburban small town living. At the naive age of 15, a spontaneous decision was made to attend boarding school in England, a country I had never once visited. There I discovered a new comfort zone, released an abundance of insecurities, developed a lust for travel, and decided to never leave. At present I have lived in several big cities around Europe, found a home in Notting Hill, and hope to one day move back to California, or start a family in Hong Kong. When in America I’m a Londoner, at home in London I’m a Yank, while visiting family in Taiwan/Hong Kong I’m an ABC (American born Chinese), and in Europe I’m considered Chinese. So apparently I’m an west coast American, who is from Taiwan (well my parents are), that lives in London, but possess family in Hong Kong. I think I’m confused again. Maybe I’m just International.

she considers the possibility of an alternate road…

she yearns for the day she left behind…